After all the commentary which has been devoted to the late John Hume since he went to his reward, local, national, international, what is there possibly left to say? Justly praised as he has been, as father and family man, as devoted citizen of his beloved Derry, as campaigner for social justice and political reform, as activist and visionary, as politician and statesman of country-wide and then world-wide stature, what can be added that might bring that towering stature into a more intimate focus? What insight or memory might bring us closer to the inner force which, after all, powered his many qualities and achievements? Let us hope that it is not a mere local loyalty which directs the thoughts of those who were his contemporaries or near contemporaries in the Maynooth College of the nineteen-fifties to a moment in his life which is not often given its due.

John Hume was a clerical student, as we said in those days, for the diocese of Derry from 1954 to 1957 as undergraduate and till 1958 as postgraduate preparing his M.A. We could easily look back with fond sentimentality on those times and descry in the jumble-shop of memory clear and evident signs of the greatness which he would later show. But that same dwindling band of contemporaries in the Maynooth of those days would be the first to admit, indeed proclaim, that the discernment then by College public opinion of any unusual promise or ambition would be roundly discouraged as ‘irregularity’.

It might be more profitable to look to what the man himself noted as to what Maynooth gave him: a capacity for logical thought and for persistence, what he called ‘stickability’. Anyone who experienced life in Maynooth in those days (an experience much decried nowadays) will immediately recognize these features of traditional seminary training. Contrary to popular belief, it was marked neither by pius devotion nor enthusiastic idealism. Far from the student being lured into the college and ordained before he knew what was happening to him, the seven years preparation were above all an obstacle race which it took determination to negotiate successfully; and the sustaining principle was not pius waffle but hard-headed thoughtfulness.

Can we wonder that John Hume spoke of ‘logic’ and ‘stickability’, two characteristics which more than any other nerved him for his momentous career ? If we add to that a habit of his mentioned by the celebrant of his requiem, that of seeking spiritual refreshment by a quiet visit to his neighbouring church, the cathedral in Derry, and we have a identi-kit picture of what traditional Maynooth did for its products. In that sense and in the hallowed phrase, John Hume, thinker, visionary, peacemaker, proved to be what used to be spoken of with approval in clerical circles as a ‘Maynooth man’. 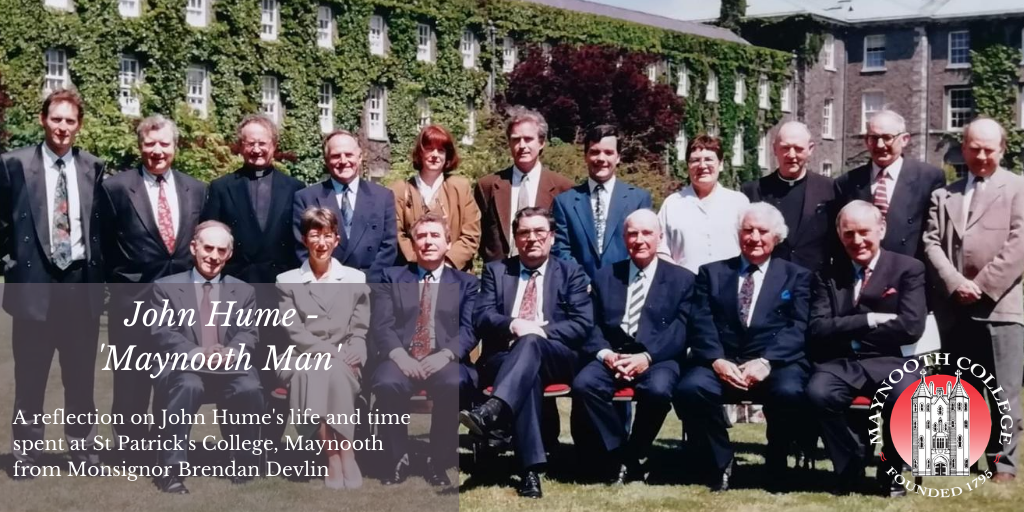