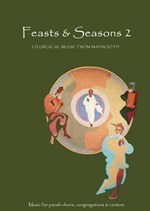 The eagerly-awaited second volume of the Church music series Feasts and Seasons will be launched in Maynooth College on Wednesday, 21 November, by the Rector of the National Seminary, Rev. Tomás Surlis.

Feasts and Seasons 2 is edited by John O’Keeffe and James Murphy. John O’Keeffe is Director of Sacred Music at Maynooth College and Director of Choral Groups at Maynooth University. He directed the music for the Papal Mass in the Phoenix Park in August of this year. James Murphy is a former College Organist of St Patrick’s College, Maynooth. Holder of a Master’s Degree in Organ Performance from Maynooth University, he is currently pursuing postgraduate studies in music education at Ulster University, Coleraine.

Featuring music by a range of Irish composers, including Peadar Ó Riada, Ronan McDonagh and Fr Liam Lawton, as well as liturgical compositions from England and America, the collection is intended primarily for use in an Irish parish context. It contains new settings for Advent, Christmastide, St Patrick’s Day, Lent, Eastertide, Pentecost and Trinity, and includes an alternative setting of the Song of Farewell from the Funeral Rite together with Peadar Ó Riada’s setting of the Hail Mary, ‘Go mbeannaithear duit, a Mhuire’.

Feasts and Seasons 2 is now available in book and CD format, and is priced at €20. Please contact general@spcm.ie to purchase a copy

A series of regional presentations of the collection will follow on from this initial launch.